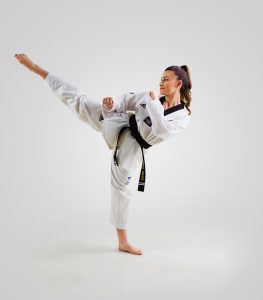 Patterns, Forms, Poomsae, are an important part of Gradings or Promotions Tests, as well as the required skill level of various techniques such as Kicking, Punching, blocking, Martial Arts Self Defence and sparring.

Like many well-structured Martial Arts such as Karate, Kung Fu, Hapkido etc. Taekwondo has ranks for the colour belts called GUP and for the Black Belts as DAN

New students begin at 10th Gup which is a white belt and advance down in number of Gup to reach 1St Gup which is Red Belt with three stripes then into an intermediate rank of Cho Dan Bo provisional Black belt. After this the student takes a Dan test, after which the student becomes a 1st Dan Blackbelt.

The colour belt system represents the progression of a student from white, the innocence of a beginner to the maturity & skills of the black belt, who is impervious to darkness& fear.

Grading tests, a great way to motivate and reward students of all ages, gradings are also a great way to teach kids & teens about Goal Setting and achieving Goals.

Is Pinnacle Martial Arts Taekwondo Near Me?

Pinnacle Martial Arts Academy Marrickville, is conveniently located within 2-5 km from these nearby suburbs.

Pinnacle Martial Arts Academy in Chester Hill, is conveniently located within 2-5 km from these nearby suburbs.